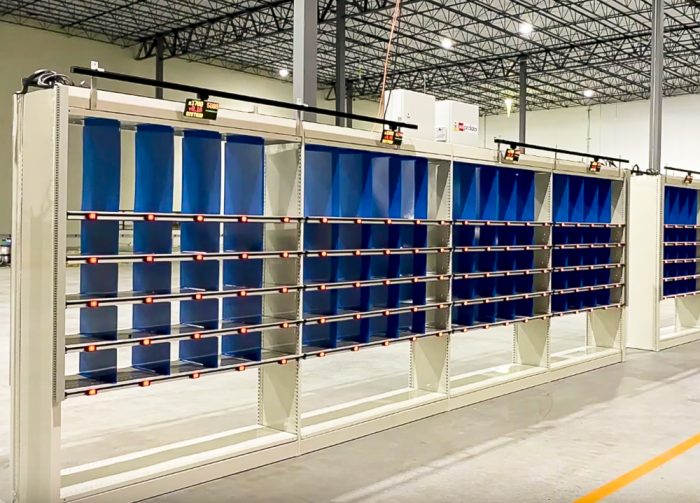 Cross-docking is a logistics practice that helps streamline supply chains by transferring incoming shipments directly to customers or other modes of transportation. This procedure essentially cuts out the middle stage of storage and enables a direct line from supplier to retailer or customer.

One of America’s largest retail warehouse clubs is a beneficiary of this supply chain technique. With myriad cross-dock distribution centers across the U.S., this warehouse club is able to greatly expedite their flow of goods and improve warehouse efficiency.

Yet, in order to effectively implement this logistics practice, they need an efficient pass-thru system. That is, they need a system that can optimize sorting and allow easy access from both the shipping and receiving docks.

With new cross-dock distribution centers in Texas and California, this warehouse club was on the hunt for an effective pass-thru system. It was one of Western Pacific’s new product lines that caught their attention: the Accu-Wall shelving system.

Accu-Wall shelving systems: designed to generate leaner, more efficient pick and pack procedures.
Accu-Wall shelving systems encompass elements of other well-known Western Pacific shelving systems, but with the added advantages of greater pass-thru capacities and easy integration with light directed technology. These additional features give the Accu-Wall its distinctive sorting and organizing capacities, allowing for an increase in pick rate productivity by around 40% compared to manual methods.

The Deluxe line of Accu-Wall, with integrated pass-thru capacities, was perfect for the warehouse club’s cross-docking need. And with box posts at its corners, the Deluxe Accu-Wall offers increased stability and extra rigidity for those larger pallet loads.

Each Accu-Wall unit is 5’ x 5’, but multiple units can be joined to create longer systems. At the warehouse club’s California location, the line of Accu-Wall units spans 70-80 ft long. And each unit is further subdivided into smaller cubbies, for more specified sorting capabilities.

Here is a video of Accu-Wall in use:
Putwall solution explained at Capacity LLC, NJ, USA – YouTube.
This is not the same usage being described in this story.

Seamlessly executed project; streamlined throughput.
The warehouse club’s projects went distinctively smooth; no major hiccups nor obstacles. The Western Pacific project manager was hands-on, and the warehouse director said that the team did a phenomenal job on installation. The Accu-Walls were assembled in less than two weeks, and the club has been benefiting ever since. Pick and packing has never been so easy.

The club has already purchased more Accu-Wall systems for their newest facility, to ensure they can continue to obtain that same streamlined simplicity for their cross-docking applications.